These were the two watchwords of a lawyer upon acquiring a place to house his office and his home in a booming sector of Outremont after spending 25 years in Old Montreal. To create a home for himself and his two teenage children, this professional decided on an office building and an adjacent vacant lot surrounded by beautiful mature trees.

It was an office building, and still is in part, because the lawyer-owner has turned it into ​​his office and his home. Vinyl siding with a strong presence of steel decorates the façade and a red glass door is intended as a nod to the other house he left behind.

In 2003, as new owner, he hired Pierre Mierski of Lemay Michaud Architecture Design. To reduce costs, he will be the contractor, will negotiate, do the shopping himself and will oversee the site which he will visit every day. That’s because a new section is being built behind the existing building which dates back to 1953, and an extra floor is being added. Ultimately, the total surface area reaches 5,000 square feet which is the equivalent to 7½ rooms, explains the owner. However he add that there is almost nothing else … but space! And this is exactly what he wanted: a beautiful living space. The residence is built for entertaining, somewhere you can feel good. He did not want his home to be a museum.

The Italian-made (Cuisilab) kitchen is a mixture of shades of gray, stainless steel (JC Perreault appliances) and granite, with a custom-designed sculptural hood.

This simplicity illustrates the essence of the whole project which goes from a product or a sophisticated concept to a piece of furniture purchased at IKEA. Among the enlightened choices (and not just because they favor light), are the many commercial type aluminum windows (Alumico), including a customized size in the bedroom, and the tempered glass of the stairs without any stair risers. Then there’s the garage door which provides access to a loggia in the living room. And we definitely have to point out that steel ceiling! It’s a steel deck made of corrugated iron used for forming concrete. Here, a coat of gray paint usually used on cars was applied to it. As for the insulation, it’s located outside in order to keep the interior bare. In addition to these choices, which are rare in the field of construction, the owner also chose to go with more commonly used suppliers, such as IKEA. This is the case for the chairs in the dining room, which he wanted to be his favorite color, red. After much research, it was at this Swedish chain that he finally found chairs with backs that would not overshadow the large pine “refectory” style dining table, with a base made out of steel I-Beams. A great find at the Hôtel Sacacomie!

In the end, the result is a house which is light, airy and green, thanks to all the foliage. Better yet, its orientation allows for spectacular sunsets. Despite appearances due to an architecture that is rarely found in residential areas, the result fully meets the customer’s demands and needs. 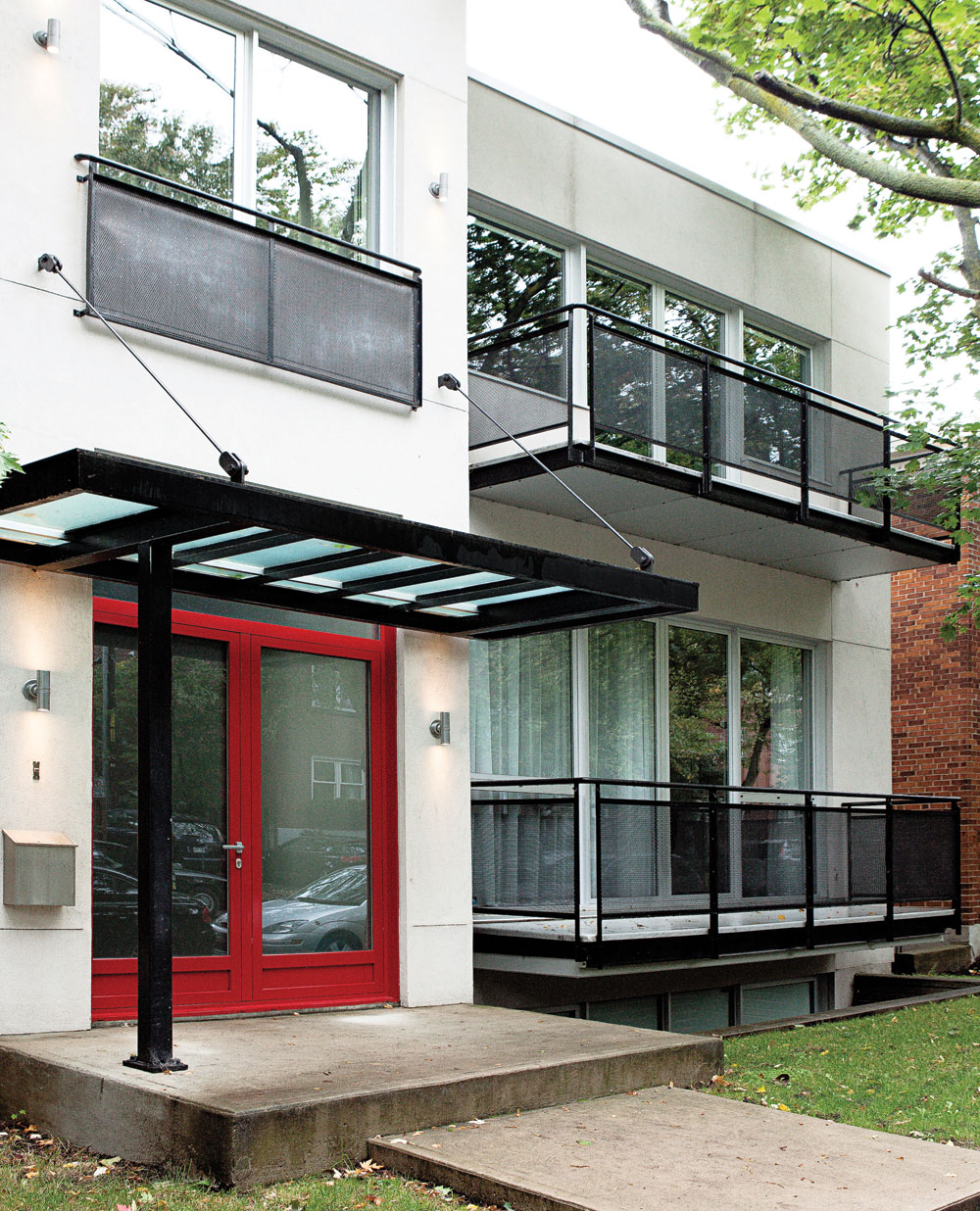 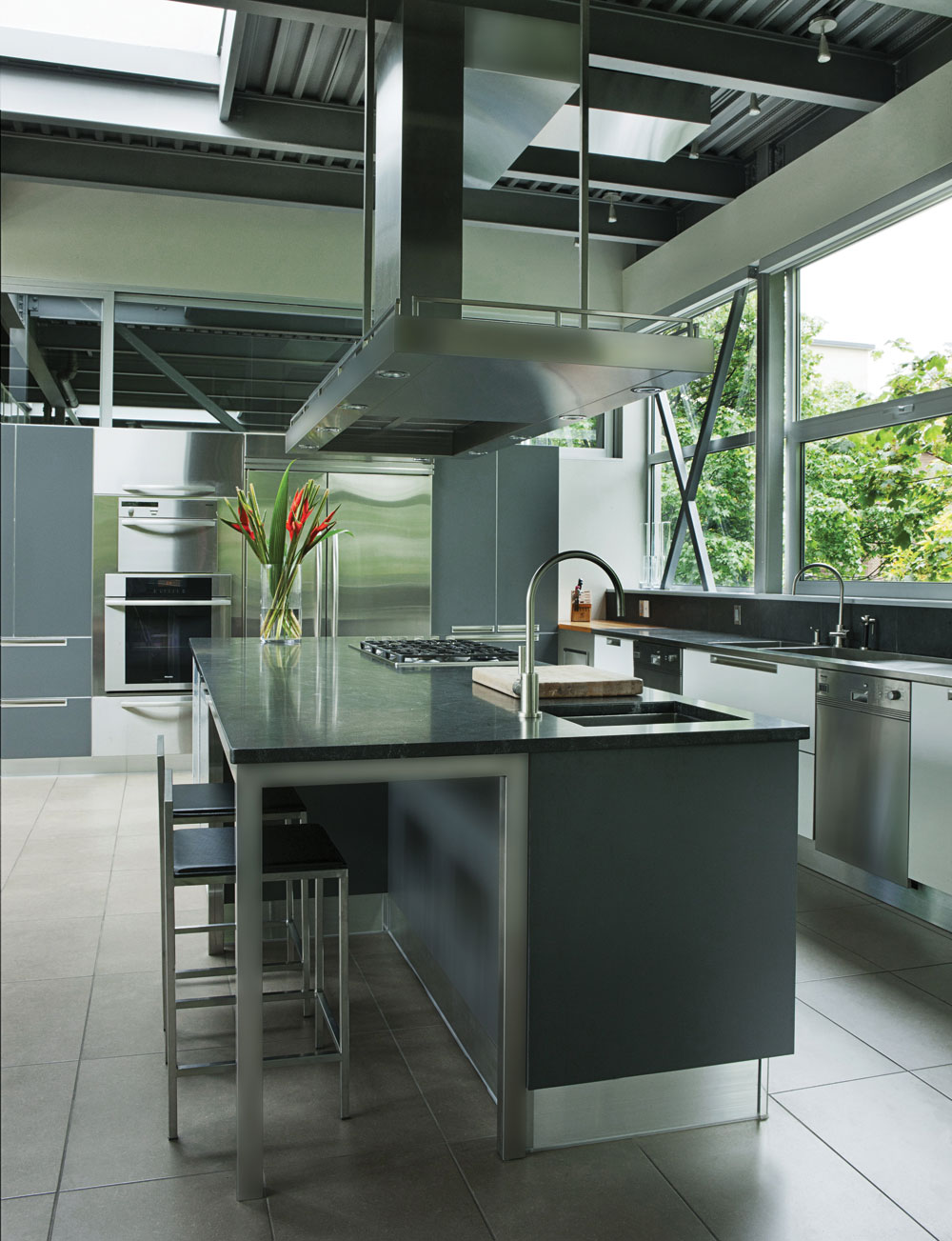 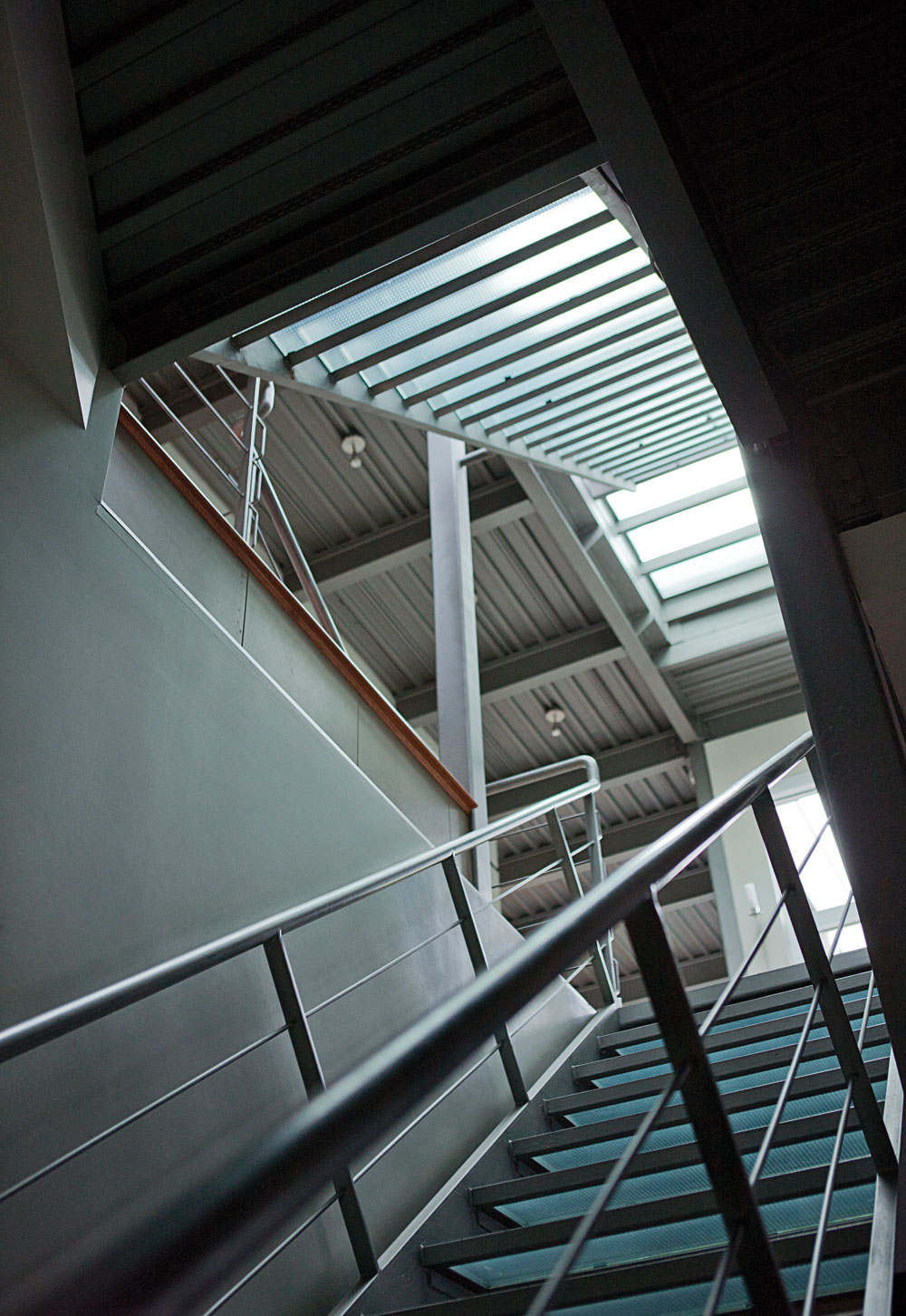 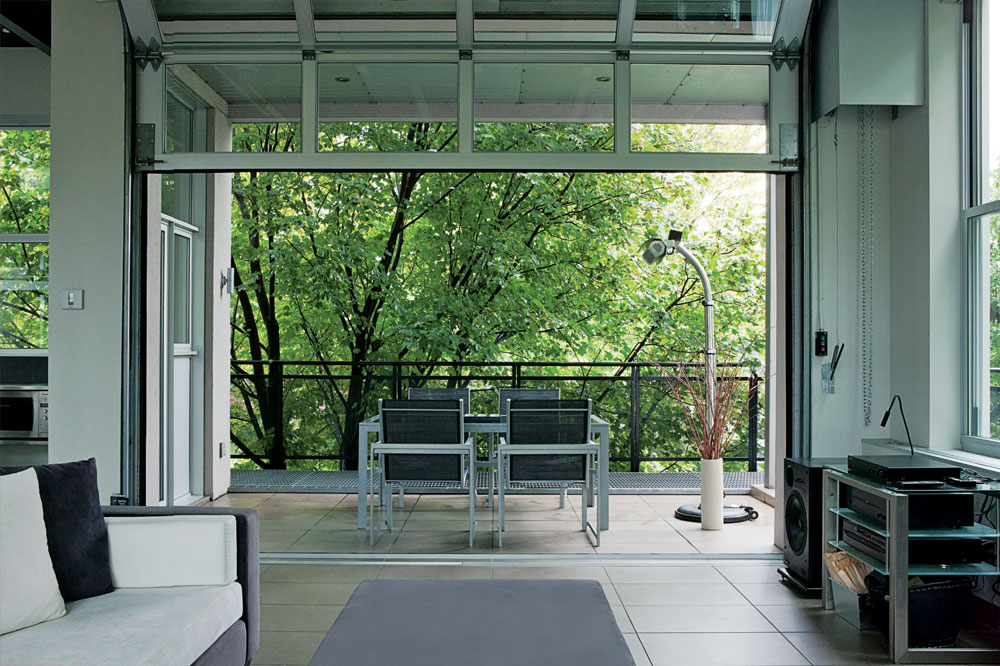 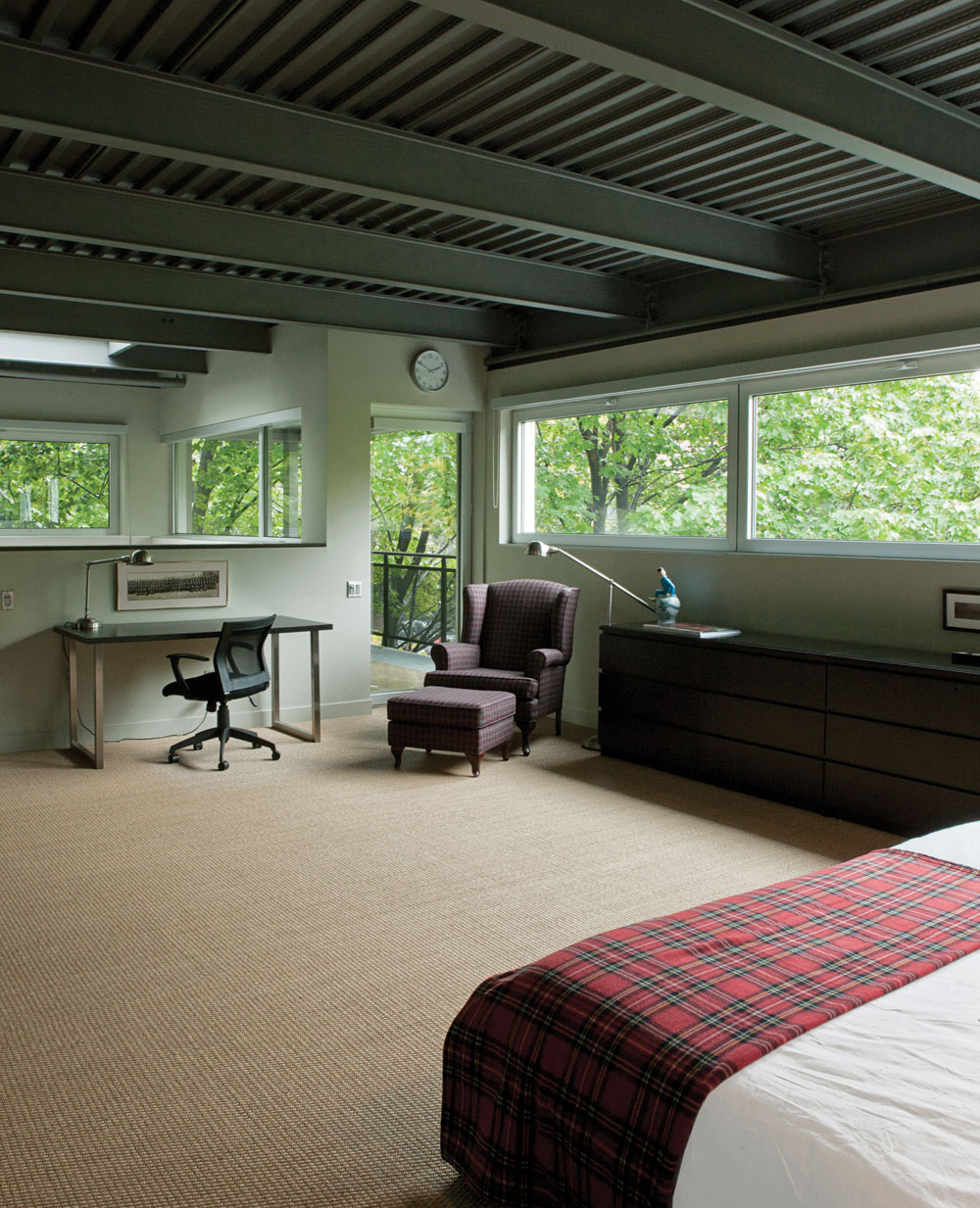 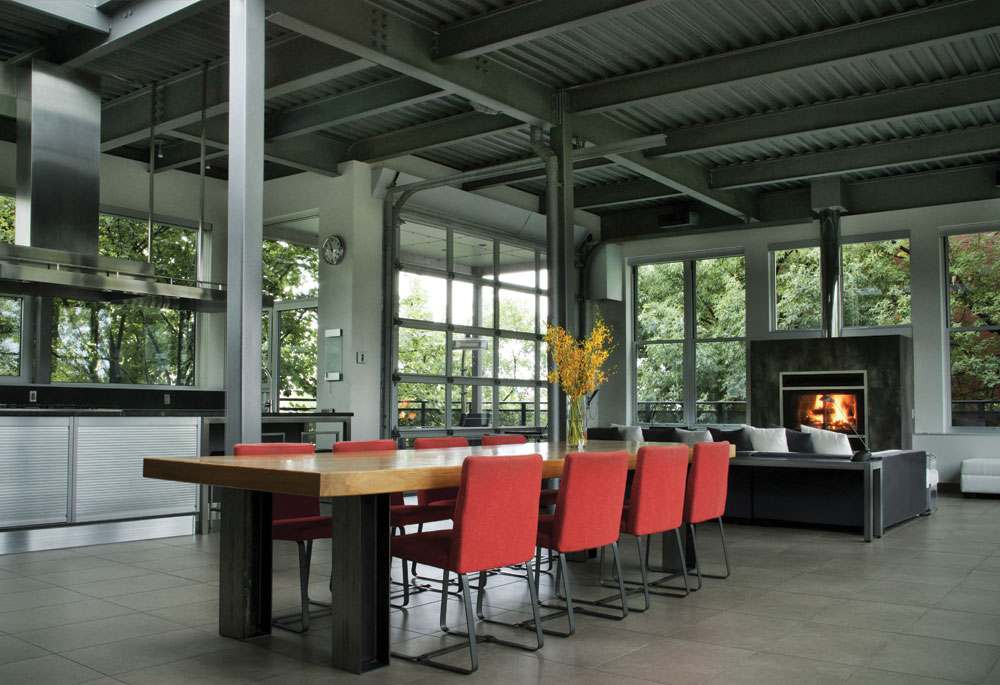 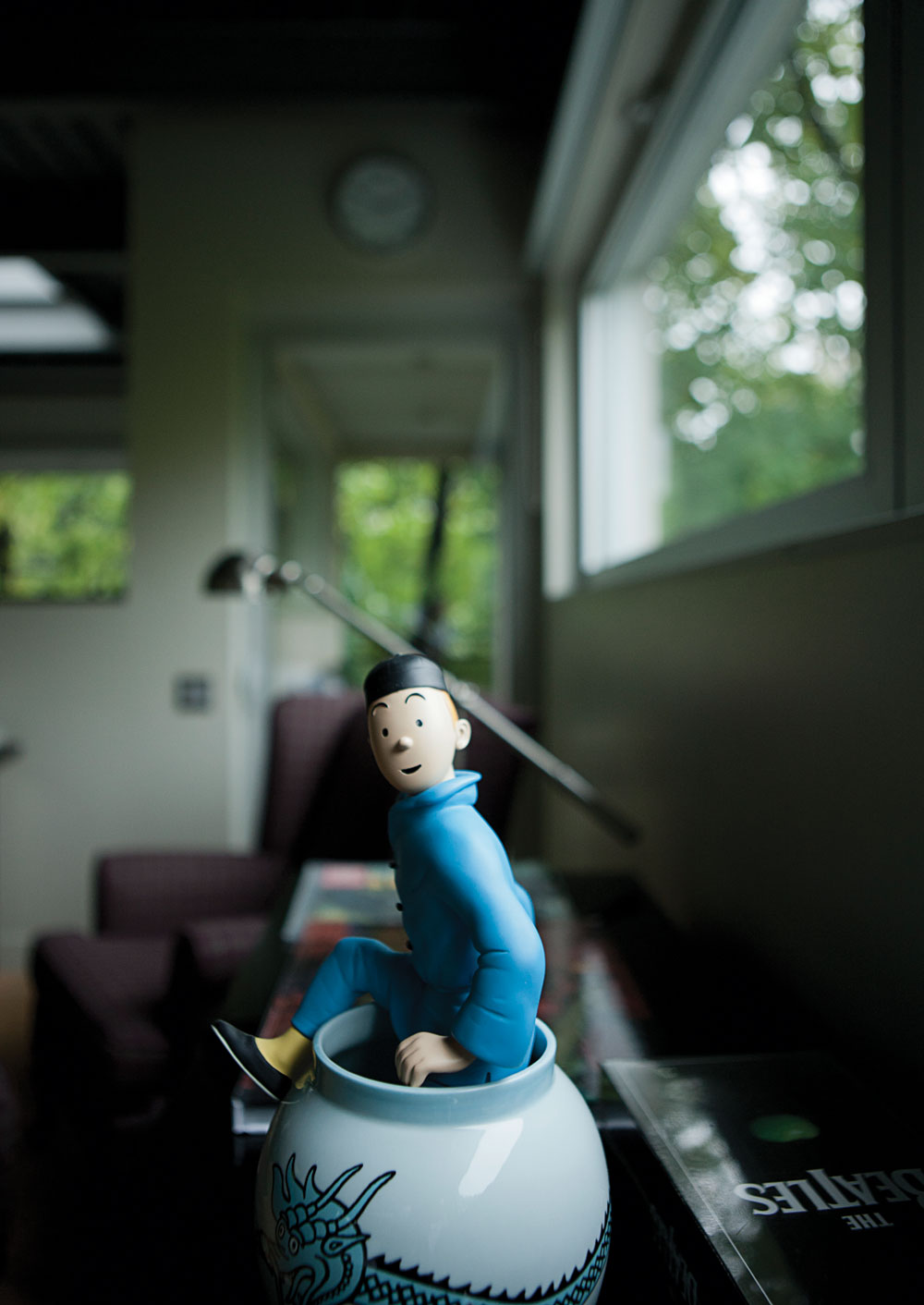