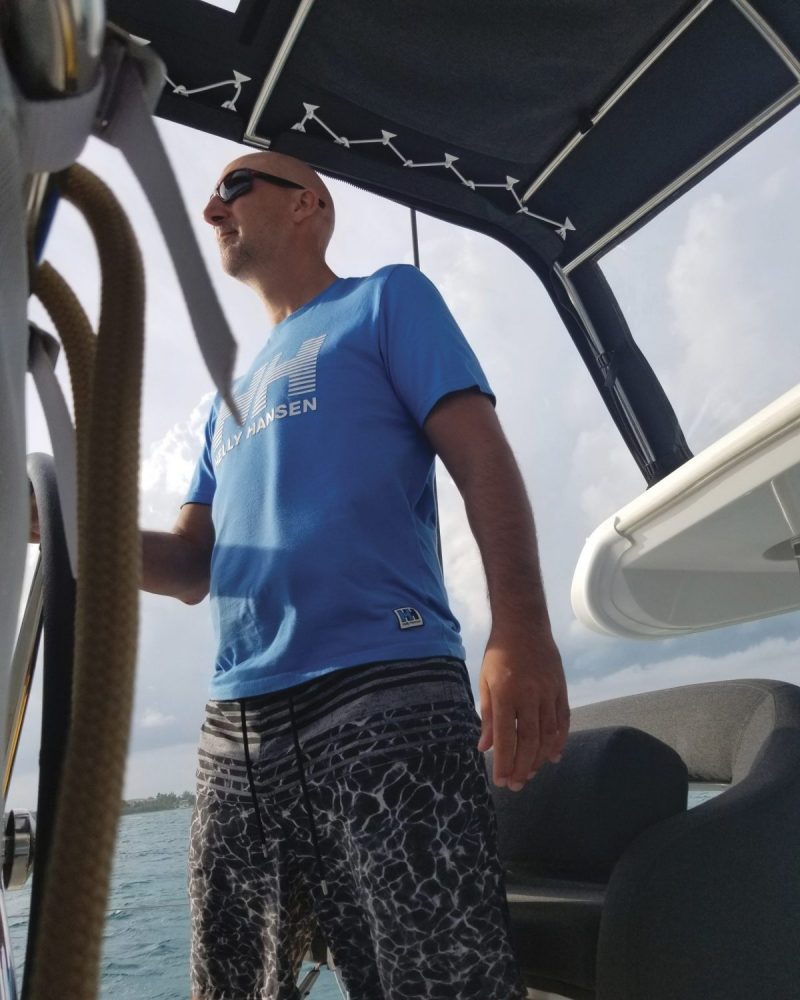 Singer-songwriter Richard Petit, like his famous brother, comic Martin Petit, is no stranger to the adrenalin rush that comes of performing before an audience. his credits include collaborating with the group Les Colocs and creating music for television productions. However, all this is in the past since he found his lodestar and began living his dream.

Gliding over the sea, Petit has found perfect happiness in the sailing world. He now owns a 40-foot catamaran and works as an Americas/West Indies/Caribbean consultant for Dream Yacht Charter, a leading charter company specialized in cruises and the rental, sale, and management of luxury sailboats around the globe. “The adrenalin rush I get when I help a client purchase a yacht is similar to the one I got from performing,” confides Petit. These boats are worth anywhere from $750,000 to $7 million.

Best of all, his wife Marie-Andrée Poulin, a TVA personality who was a regular on Salut Bonjour (she recently left television to return to teaching), shares his passion and loves their sailing holidays in the south with their daughter Gabrielle, age 7. “He’s found his path. It’s been a real revelation: I’ve never seen him so happy,” she explains. 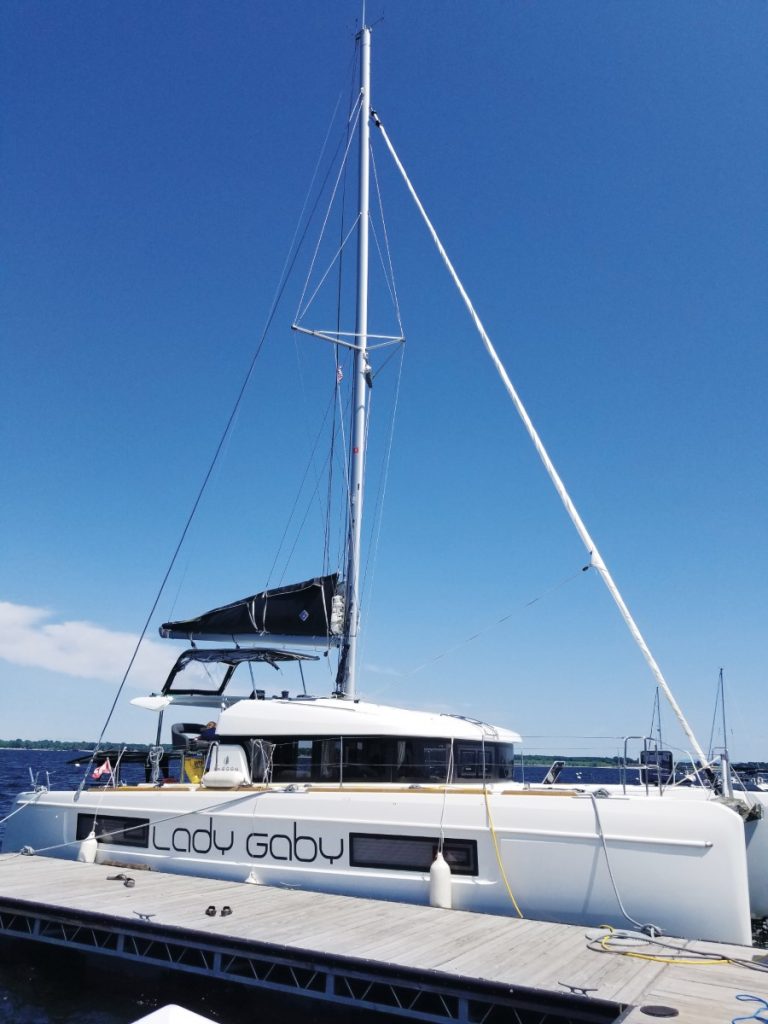 BEHIND THIS MAJOR CHANGE WAS AN INCREDIBLE
TWIST OF FATE.

Back in 2006, Petit was floored by a cancer diagnosis. Undergoing chemotherapy to fight the disease, he experienced anxiety attacks and asked an ex-girlfriend to bring him something special to read as a distraction. She brought him sailing magazines. He got better and, one evening in 2010, the two sat down to watch the French documentary TV series about the sea, Thalassa. The episode that night profiled a couple who had sold everything to sail around the world. “All during the show, I kept asking myself: why not us?” Deciding to take action, they started going to boat shows and, over several years, took multiple courses in sailing, weather, safety, ocean survival, and more. At a key moment, they met the CEO of Navtours, a division of Dream Yacht Charter.

In 2018, Marie-Andrée, Gabrielle, and Richard took their first vacation on their boat, sailing 1,200 nautical miles to St. Martin, the British Virgin Islands, and the Bahamas. They were hooked! “I cried from sheer pride. Never in my life had I felt such total freedom and happiness. We spend our lives being busy, but when you’re at sea, time slows down and you can savour every moment to the max.”

ARE WHERE DOES HE FIND HEAVEN ON EARTH?

“Only three hours by plane from Quebec lie the 360 islands and islets, many of them uninhabited, of Exuma, a district of the Bahamas. Snorkelling through the national park with a mask and flippers, I had never seen so much marine life. At the age of 3, my daughter swam with sharks, rays, and turtles.”

His second favourite spot is Les Saintes, just south of Guadeloupe. Frozen in time, the islands are like a slice of rural France, where one shops at the baker and the butcher. And what amazing gourmet restaurants! “We also love the scenic mountains in the British Virgin Islands, home to more people and action than the first two destinations.” Some people say that the quest for freedom is the ultimate journey. With more projects in mind, Richard Petit is moving in that direction.

“Some day, we’d like to spend six to eight months on our sailboat, stopping over in Les Saintes so Gabrielle could experience going to school there.” 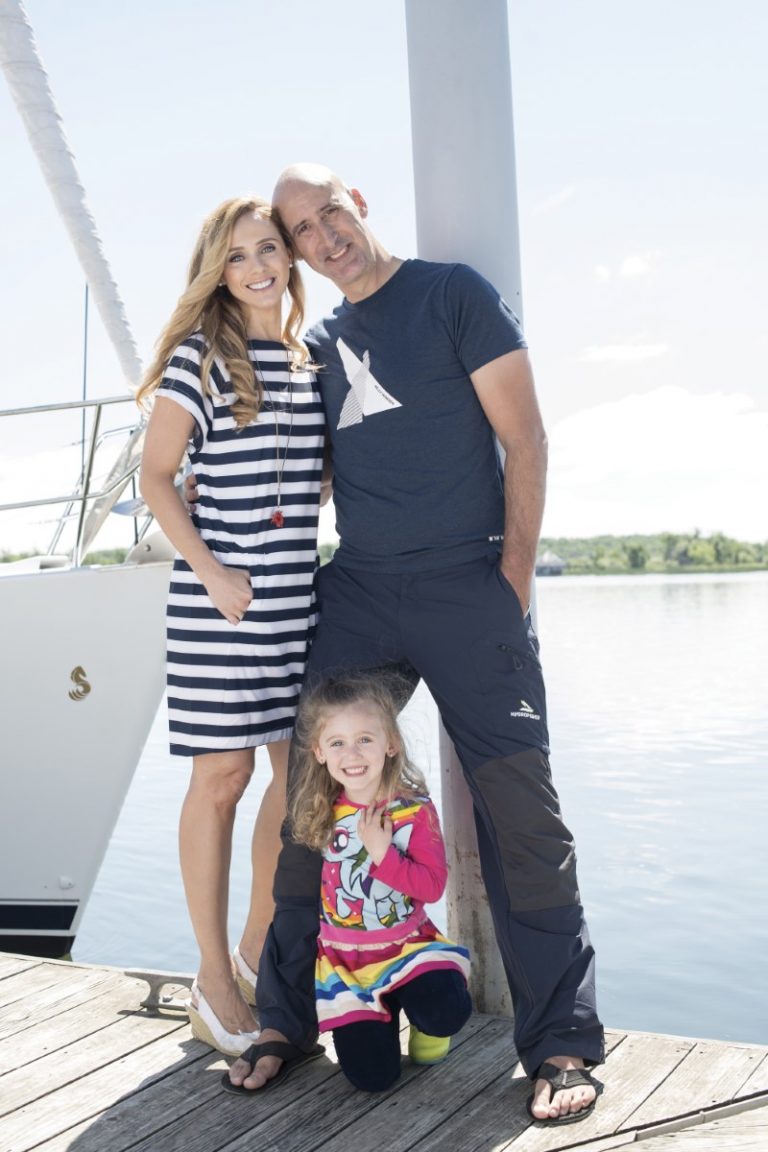