Marc Berher, the designer who breaks down barriers!

THIS 1990’S CONCRETE HOME WAS COMPLETELY REMODELLED BY INTERIOR DESIGNER, MARC BHERER, TO MAXIMIZE FLOW BETWEEN THE VARIOUS LIVING AREAS AND MAKE BETTER USE OF THE SPACE.
PHOTOS : ADRIEN WILLIAMS

The owners of this closed floor-plan house wanted to open up the common rooms to create one continuous space. Aware that concrete homes can pose major challenges, they initially thought about moving. “My husband saw an article about a project designed by Marc Bherer, so he contacted him to find out if it was possible to remodel our house,” recounts one of the owners. The designer drew up two different proposals, and the owners fell in love with the second. “The challenges involved drains and other technical elements that could not be moved. However, a concrete frame and columns means there are no load-bearing walls, so we could remove the partition walls,” explains Bherer, the president and principal designer of firm, Desjardins Bherer. Although some walls did come down, the designer also highlighted what was already there, notably removing the cladding from the support pillars to reveal the concrete. This material creates a link between the rooms, starting with the entryway, which feels like an art gallery. “The large piece at the end of the hall hangs against the kitchen storage wall,” explains Bherer.

The various arches in the entryway have disappeared, numerous dividing walls have come down, but the different living areas are nonetheless well defined, thanks to the use of columns and the double-sided linear fireplace. Though the fireplace was original to the house, the surround was refaced to match the concrete. It faces the formal living room on one side and the dining room on the other. A new fireplace was added in the TV lounge area. Its base can hold storage and extends into the kitchen area in the form of a banquette. The open concept means that the home’s different areas are getting more use. “When everything was closed off, some rooms were almost never used,” notes the designer. However, it was important to unify all the spaces by playing with materials and textures to warm up the monochromatic decor.” There are two living rooms, but we did not want them to feel like two separate entities, so we used the same rug and lighting,” explains Bherer, who also standardized the warm white ceiling fixtures found throughout the space. Accent lamps in the living rooms and the spectacular chandelier over the dining room table create an inviting atmosphere.

“WE CUT GEOMETRIC SHAPES OUT OF THE OAK HEADBOARD TO PUT IN A BACKLIGHT SYSTEM. GREY TAFFETA CURTAINS HELP PRESERVE PRIVACY.”

After being completely rebuilt, expanded and opened up, the kitchen now has tons of natural light thanks to a large new skylight. The designer explains that the homeowner wanted a streamlined style with no upper cabinets. Therefore, he maximized undercounter storage and located all the small appliances in the storage wall facing the window. The quartz countertops and lacquered cabinets blend seamlessly into the decor.

The bathroom, formerly covered in blue mosaic tiles, now echoes the minimalist ambience of the new interior with Laminam tiles. “The wall of light in the bedroom is very warm. I find that everything comes together beautifully, even though every room is different; it’s extremely cosy and comfortable,” notes the homeowner. 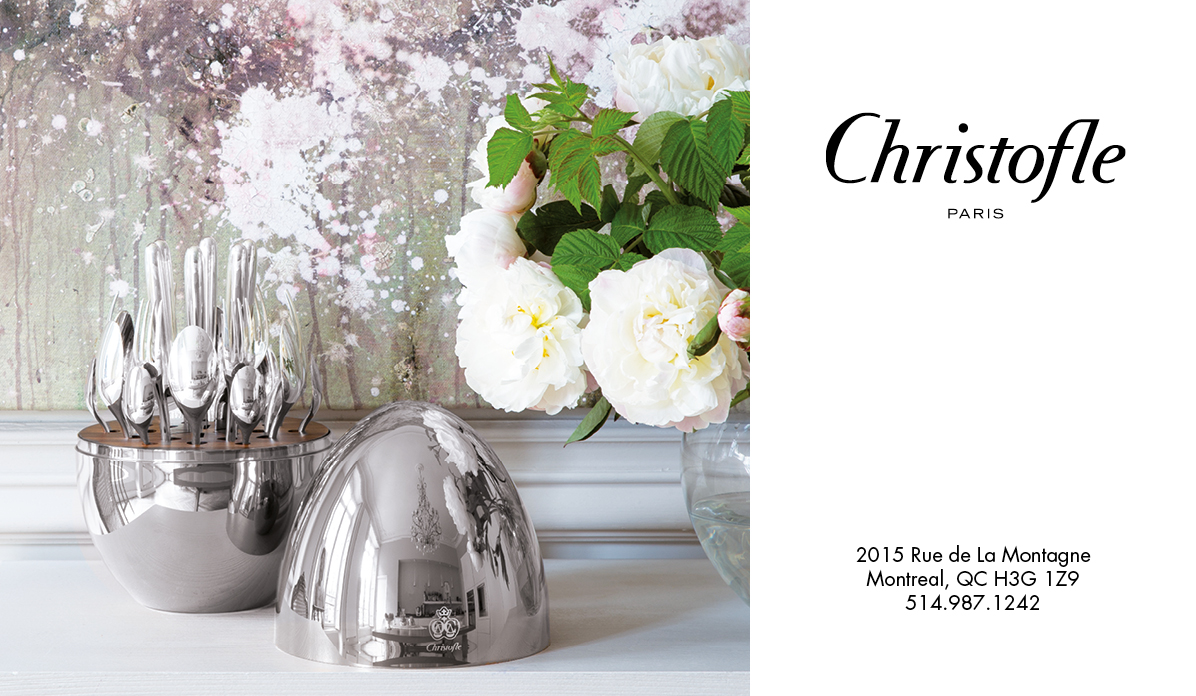